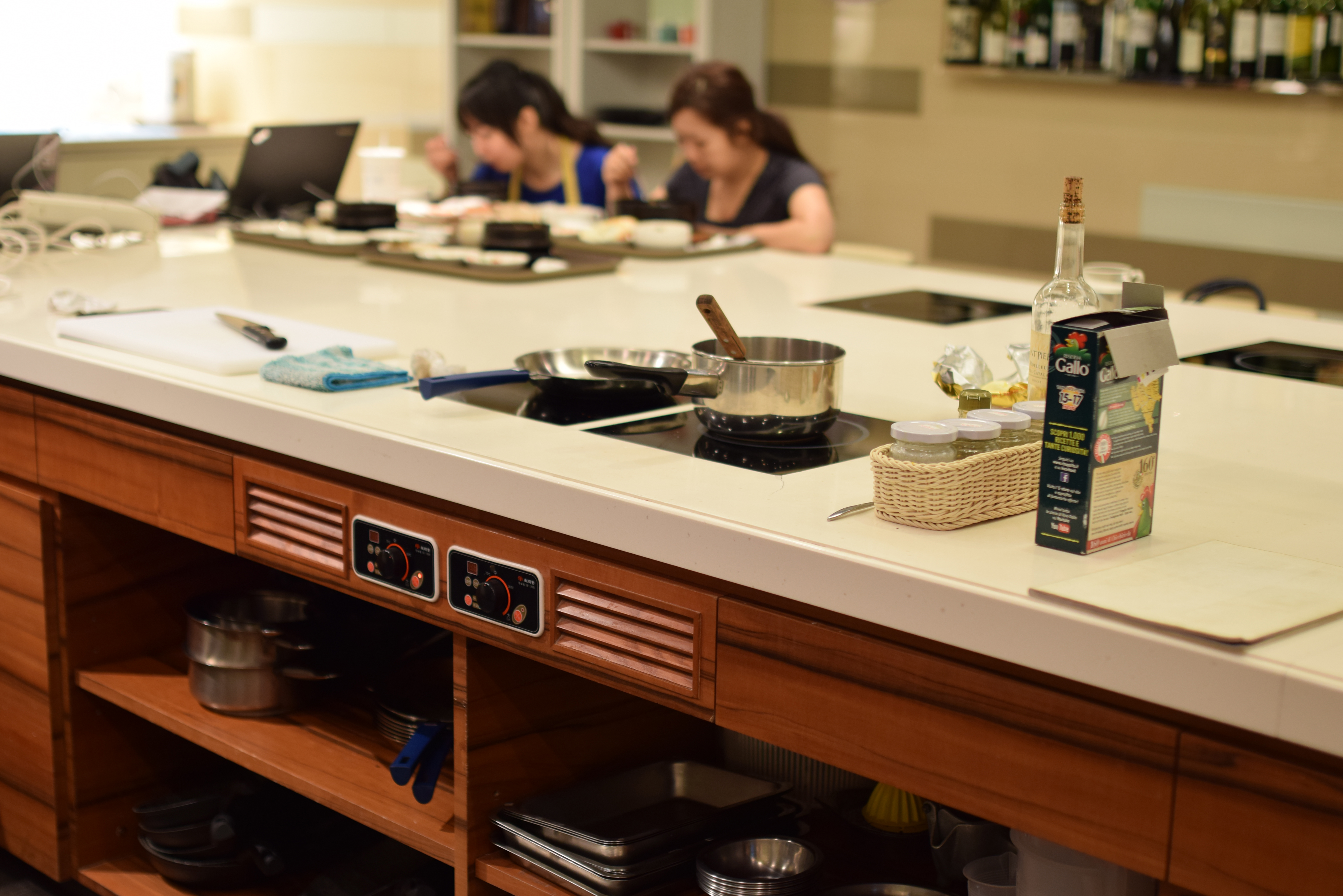 Taiwan is a land of convenience, in particular with regards to eating. It's always possible to grab a rice ball, sandwich or instant noodles from a 24-hour convenience store. For the slightly more discerning diner, the island's cities and towns are filled with small Mom-and-Pop streetside restaurants serving traditional Taiwanese fare. Sit-down Chinese restaurants and night markets are plentiful too.

With food prepared by others so plentiful, why would anyone in Taiwan bother to cook? For Westerners, one of the main reasons to cook is because eating out is so pricey. In New York City, for example, cooking dinner at home is typically just a fraction of the cost of a restaurant meal. Even in small towns in the United States, it's much more economical to cook at home.

In Taiwan, that's simply not the case. Buying fresh ingredients to make several Chinese dishes is likely to be similar in cost to having the same meal in a no-frills restaurant. Sometimes the restaurant meal could be cheaper. There's also the issue of leftovers. When cooking for just one or two, inexperienced cooks often buy ingredients in overly large quantities. Since most people don't want to eat the same thing several days in a row, that result is that the food is wasted.

But there's another reason why we shouldn't eat out so often: "It's much healthier to cook at home," says Tony Wang, business development director of the Fun Cooking studio, which offers a wide variety of cooking classes in its two Taipei locations. "You can't control the amount of chemicals, oil and sugar in the food when you eat out."

Founded in 2015, Fun Cooking endeavors to reintroduce Taiwanese to a healthier way of eating - a way of eating that was common as recently as a half century ago, before Taiwan's economic miracle had come to fruition. Back then, families ate at home frequently. Going out was more of a special occasion.

Taiwanese households were typically single income. The husband was responsible for earning money while the mother was expected to raise the children and handle household duties. "Mom did the cooking, and if she had a daughter, the daughter would learn how to cook from her mother, just as her mother learned from the child's grandmother," Wang says. "A lot of cooking traditions were passed down that way from one generation to the next."

That began to change in the late 1970s as Taiwanese household incomes soared. Some Taiwanese born in the 1940s and 1950s had it rough as children, and now that they were no longer poor, they wanted to take good care of their own children, Wang says. As a result, there are quite a few Taiwanese today in their 30s and younger who didn't develop the habit of cooking for themselves.

Taipei-based freelance writer Judy Lin is one of those Taiwanese. She currently lives with her parents in the Danshui district of New Taipei City.  "I am able to cook but I don't usually bother because I am not efficient about it can't make it look nice," she says. "So I end up either having whatever my mom prepares or sometimes I eat out."

Anna Chang, a corporate communications professional, cooks for her son twice a week. "He likes noodles and Japanese curry rice, so I cook those for him on the weekend, but during the week we often eat out," she says. "I wish I had more time to cook, but I don't leave the office until after 6pm, and it takes almost an hour to get home."

Not all cooking has to be time-consuming though, Wang observes. During an interview with the Taiwan Visitors Association at Fun Cooking's Bellavita studio near Taipei City Hall, head cooking instructor Vincent Chou, who formerly worked in several Italian restaurants here, prepares a vegetarian risotto dish speedily. Risotto is a northern Italian rice dish cooked to a creamy consistency.

The theme of the cooking lesson is how to use leftover food to make a tasty meal. The ingredients aren't necessarily left over from something already cooked, but can be vegetables, meat or other ingredients purchased to make a meal that ended up not being used for one reason or another. People who live alone and like to cook for themselves often encounter this situation.

Today, Chef Chou has onions, red and yellow bell peppers, mushrooms and yellow rice. As he steams the rice, he expertly slices the vegetables. He then fries the rice, onions and vegetables in a pan on medium heat in a pan to make the risotto. The entire process doesn't take more than 30 minutes. While some recipes call for adding wine, Chou leaves that out as his variation of the dish is intended for families with young children.

The vegetarian risotto is delicious - it takes like something I had on a visit to Rome years ago. The recipe is authentic, Wang says, which is not always the case in local Western restaurants. "Restaurants are focused on volume in many cases, and so tinkering with Western recipes to satisfy local tastes is pretty common," he says. "It's the same thing in Chinese restaurants in the U.S."

For Fun Cooking, "this is about education, we aren't a restaurant. We start from authentic recipes because we want our students to understand how to prepare food properly for themselves, enjoy it, and not waste it."

Wang acknowledges that food waste is a problem in local banquet culture, as are the prevalence of unhealthy dishes containing few vegetables. He points out that when Taiwan was an agrarian society, most people rarely had the chance to eat meat. Now that Taiwan has become much wealthier, meat is plentiful and people have money to spend on elaborate meals. The problem is that banquet hosts often order lots of food simply to show they are good hosts, even if it is more than the guests can consume.

"Over ordering is a type of Taiwanese hospitality," he says. "If a host only orders a few dishes, some guests - especially older guests - will feel the person is stingy."

Still, with younger Taiwanese, things are changing, he says. Their views on health and dining culture are more advanced than the older generations, he observes, adding that younger Taiwanese are some of the most enthusiastic students in Fun Cooking's classes.

Carrie Chen, a sales associate in her late 20s, loves to cook at home. "I like to be in control of what I eat: the ingredients, how they're cooked, what the dishes look like," she says.

Currently, Chen is on a ketogenic diet, which is beneficial for weight loss and performance. It is intended to boost the body's production of small fuel molecules called ketones, an alternative fuel for the body used when blood sugar is depleted. A ketogenic diet requires eating lots of fats and very few carbohydrates. That's next to impossible in most small Taiwanese restaurants, where rice, noodle and dumpling dishes proliferate.

Ian Crews, a freelance copywriter and translator based in Taipei, is also a proponent of low carbohydrate intake. That's one of the reasons he cooks at home four to five times a week. "It's important for me to control my diet and what I put into my body," he says. Ironically, "since eating out is so cheap in Taiwan, I sometimes spend more to cook for myself, but it's well worth the cost."

He continues: "A lot of restaurant food here is delicious but it's not necessarily healthy. Noodles and rice (high in carbohydrates) are everywhere, which have very little nutritional value. Meat dishes are pan fried in lots of oil. There are plenty of stewed dishes, which are usually lower in calories, but still very high in sodium."

Looking ahead, cooking at home in Taiwan is likely to become increasingly common as Taiwanese place greater emphasis on their health, Wang says. "I can think of plenty of delicious food I have in restaurants which isn't nutritious but I still enjoy it," he says. "It's OK to have that type of thing once in a while. But for the things we eat on a day-to-day basis, we need to focus on both what tastes good and what's good for us. The only way we can ensure both of these things is by cooking for ourselves."